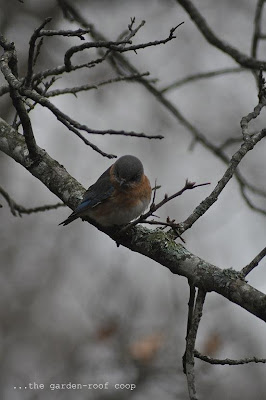 As the female Eastern Bluebird patiently watches, the male  puts on a show and proudly displays his gorgeous blue feathers. I'm sure his antics are well meaning and he is only trying to reassure her that she got the best bird, but he is quite the show-off...
A few weeks ago I watched him go in and out of the bluebird house I have outside my bedroom window, but to my disappointment, they didn't choose this spot for their nest. I latter learned that the male was actually performing a "Nest Demonstration Display" to attract the female. He "demonstrates" to her that he is capable of building a nest, but when it's time to get down to work, he doesn't do a thing to help! The female solely builds their nest and incubates the eggs.  Even if he doesn't do his share of the work at the home nest, his charm and good looks are enough for me... 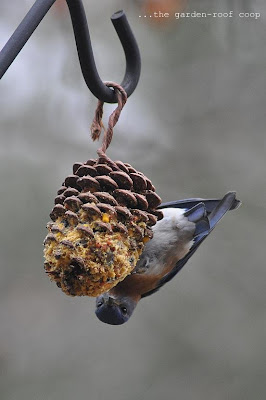 The Eastern Bluebird, Sialia sialis, is a small thrush that prefers open woodlands and farmlands.  The bluebird declined in numbers in years past partly because of competition with other birds such as starlings and sparrows for nest cavities. Now, thanks to a huge campaign to provide bluebirds with proper nest boxes in their native habitat, their existence is no longer threatened.

I can remember my grandfather watching for the return of the bluebirds each spring, but I've had at least three visiting my feeders all winter. The availability of food usually determines whether they migrate and between my suet, that they are particularly fond of, and the availability of natural food sources, they must have felt secure that they would make it through the winter months. 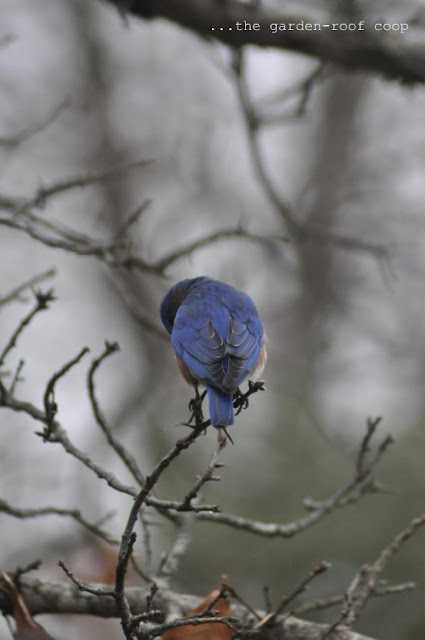 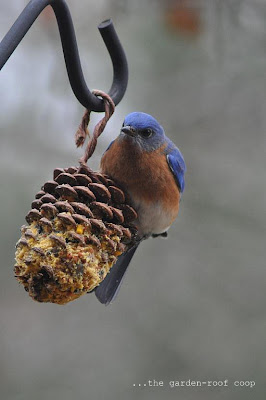 On March 30, 1927, the native Eastern Bluebird became the official state bird of Missouri.  I can't think of a bird that better represents my state.  Missouri is know as the "Show Me" state, maybe that's why the male has to do the nest building demonstration... The female can't just take him at his word when he tells her what a great mate he will be, she probably says, "Show me."