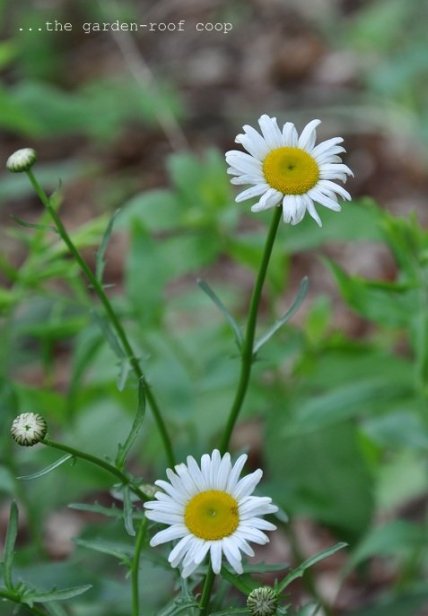 Ox-Eye Daisy 'Leucanthemum vulgare'--The meaning of its scientific name is "common white flower"--I happen to love the fact that it's common! Our Missouri roadsides and fields are covered with these long blooming wildflowers right now and the sight is anything but common! 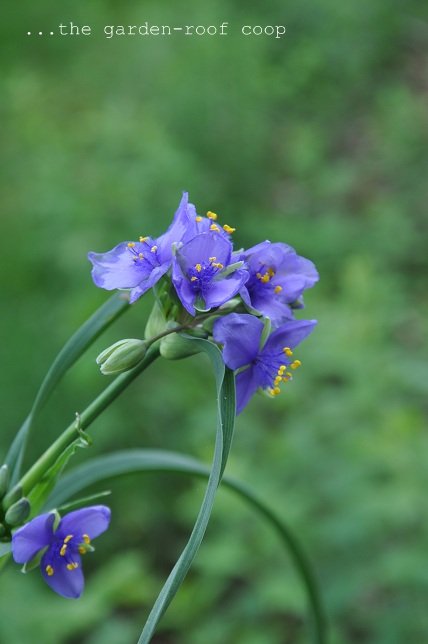 Tradescantia ohiensis 'Ohio Spiderwort'--A Missouri native plant that is commonly found in prairies, wood margins, meadows, along roundsides...  One of my favorites-I love its morning blooms, which unfortunately only open for one day. 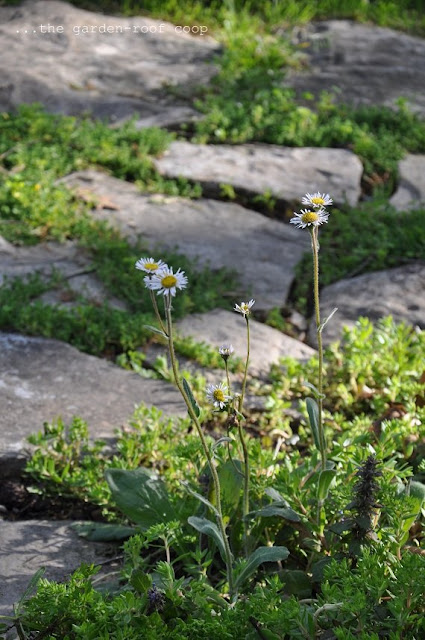 Robin's Plantain 'Eigeron pulchellus'--I bought this native wildflower last year at the annual Master Gardener Plant Sale and it's quickly become one of my favorites. The plant itself reminds me of Lamb's Ear, the leaves are short and somewhat fuzzy, but the best part is when it shoots up a wonderful daisy like bloom during April  through June.. 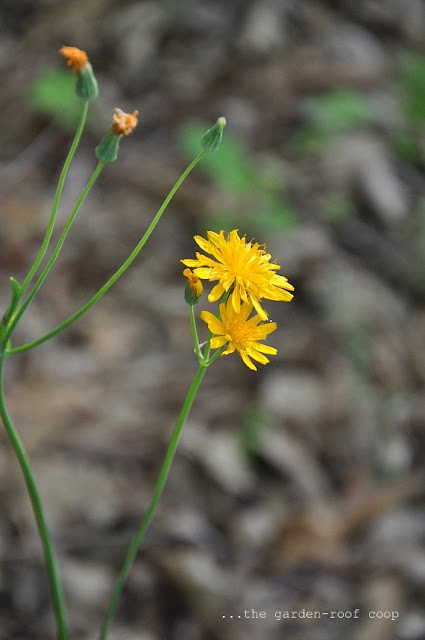 Two-Flowered Cynthia 'Krigia biflora'--Native to the US, found in open woods, near streams, in fields and meadows, generally south of the Missouri River.  I found this wildflower for the first time this year along the bank of the lake (or 3 acre pond) by my property.. 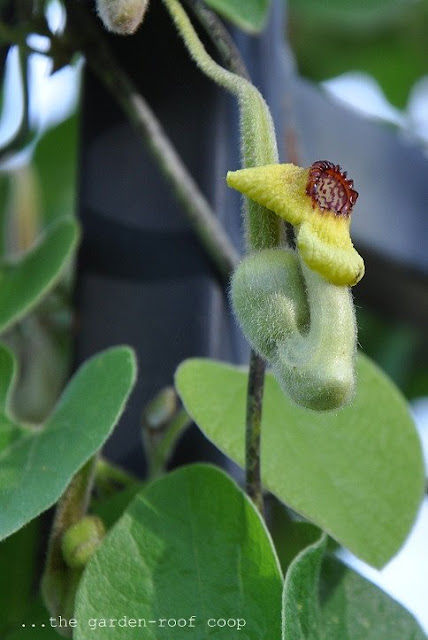 Pipevine 'Aristolochia tomentosa'--Host plant of the Pipevine Swallowtail butterfly. This is the fourth year for this vine in my butterfly garden.  Last year was the first year that it bloomed and the first time that I a Pipevine larva--actually, I had hundreds of caterpillars!  This spring it's loaded with blooms and I'm sure the butterflies will be visiting it soon... 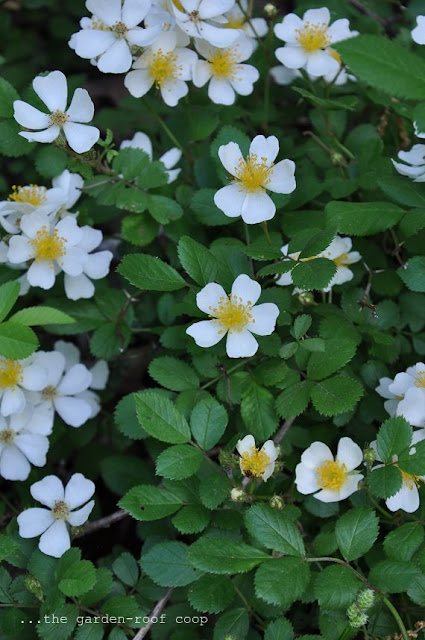 Multiflora Rose, Japanese Rose 'Rosa mulriflora'--Not a native, but this thorny bush is present in almost every field around my property and blooms profusely during the months of May and June. It was originally introduced from Asia and planted as a fence-row, an impenetrable, "living" fence.  This species now is considered to be an invasive in agricultural lands, pastures, and native settings from the Midwest to the East Coast.  I can attest that it is a huge, difficult task to remove one of these "impenetrable" rose bushes! Definitely a "wild" flower... 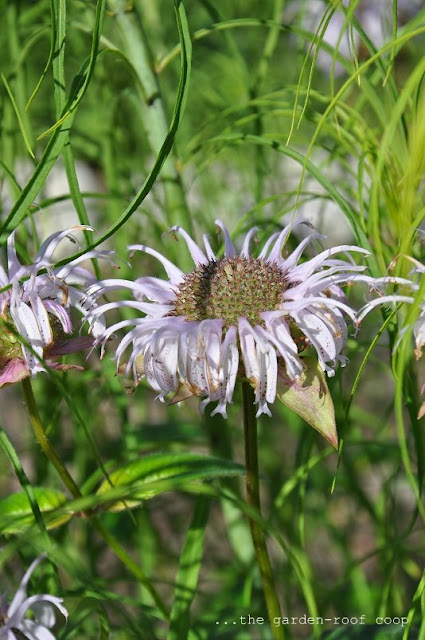 Eastern Beebalm 'Monarda bradburyan'--I'm not that much of a fan of Monardas because of their habit of re-seeding like crazy, but this native Missouri Beebalm was listed as a 2008 Plant of Merit so I suppose I should give it the respect that it's earned.  It thrives in poor, dry acidic soil and bees/butterflies are often in abundance during its long blooming season... 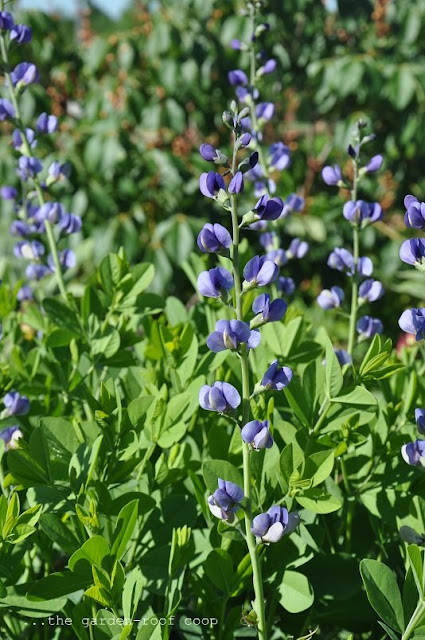 Blue Wild Indigo 'Baptisia ausralis'--A member of the pea family, this native perennial has had many uses throughout the years.  Also know as "Rattleweed," Indian children would use the dried pods with the loose seeds inside as rattles.  The Cherokee Indians made a tea from it that was used to prevent vomiting and it was also used as a source of blue dye for their clothing.

Since it's Wildflower Wednesday at Clay and Limestone it seems like the appropriate time to share my favorite wildflower guide.  In fact, if I had a top-ten book-list when it comes to gardening, wildflowers, etc....  Missouri Wild Flowers by Edgar Denison, would be near the top of the list.  I love how the book is divided into flower colors with beautiful photos and detailed descriptions that makes it quick and easy to identify any unknown wildflowers or native plants...
For info on donating to the disaster relief effort arising from the recent tornado that devastated the near-by community of Joplin, Missouri, visit Convoy of Hope.
Posted by Rebecca at 11:23 AM