Shortly after we purchased our property in 2002, I "accidentally" became a butterfly gardener. I had unearthed a large neglected garden near our house in which my plans were to create a vegetable or kitchen garden. The first season I planted a variety of perennial herbs and seeded the rest of the garden in zinnia seeds (because they were cheap and easy to grow). I didn't realize it at the time, but I had created the perfect habitat for our native Missouri black swallowtail butterfly.

The herbs - fennel, parsley - were the host plants (or food) of the caterpillars and the zinnias were the nectar (food) of the adult butterflies. This fascinated me and I wanted to attracted as many of our native butterflies to my garden that I could! Today I have 15 different host plants and my garden attracts a variety of butterflies each season. One of my favorite butterflies is without question the monarch. In fact in 2010 - one of the first blog entries I wrote was about this unique - almost magical - insect. The Monarch - in a class by itself 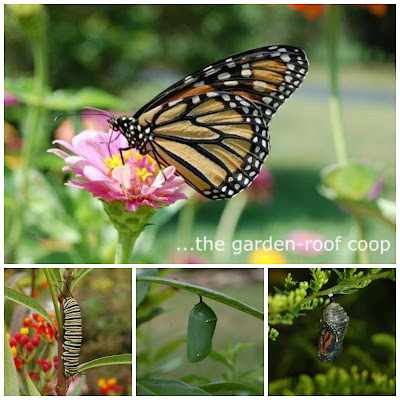 The Monarch is the only insect that migrates south and hibernates.  Each year / season, four generations are born. The first three generations live about two to four weeks, but the 4th generation migrates over 2500 miles to warmer climates in Mexico and California hibernating in eucalyptus trees (California) and on the Oyamel fir tree in the mountains of central Mexico. The same butterfly then returns to North America (another 2500 mile trip) in the spring - living a total of six to eight months and traveling close to 5000 miles!

Several years ago I would usually have a couple of times during the season in which I would see several monarchs in my garden and have 20 or so caterpillars early in the spring and again in the late summer / early fall. In the past few years, I rarely see a monarch. Their numbers have been declining the last few years for a number of reasons: logging of the fir trees in Mexico, recent bouts of severe weather and herbicide-resistant crops in the summer breeding grounds - which has led to the wide use of chemicals that kill milkweed - the only host plant for the caterpillar.

However - this year's reports are more promising! - According to Journey North: The number of monarchs overwintering in Mexico has increased dramatically from the record lows of the past 3 years, although still 30% below historic levels. The clustering butterflies cover 4.01 hectares of forest compared to a peak of 18 hectares in 1996 and an average of 6 hectares. This year's population contains 200 million monarchs compared to a long-term average of 300 million and a peak of 1 billion. Favorable breeding conditions in summer 2015 are credited for the increase.

It's been a dream of mine to visit the over-wintering site of the monarchs in central Mexico - and this year I got to check this unbelievable adventure off my bucket-list! The 2nd week in February we traveled to Mexico to visit friends vacationing in Guanajuato. From this starting point we hired a driver (much cheaper and safer than renting a car and driving) and went to two different butterfly reserves: Sierra Chincua and El Rosario.

It was around a six hour drive to the first butterfly reserve or sanctuary that we visited - Sierra Chincua. This was a Sunday and there were only a handful of other visitors at the site. We arrived around 2pm in the afternoon and it was overcast. We rented horses to take us up a short trek of the mountain (around $5.00). At this reserve the horse ride wasn't really that necessary. They only take you a short distance and then you end up hiking the rest of the way. At El Rosario the cost of a horse ride was $10. We opted to hike and this was a mistake! It's a 2 mile steep hike upward at that reserve and we regretted not forking out the money about half way up the mountain! 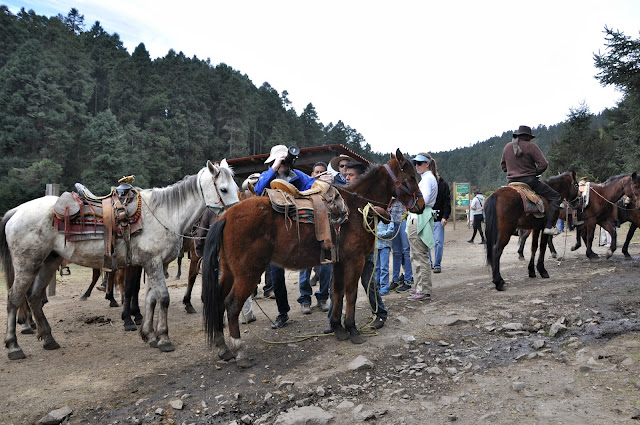 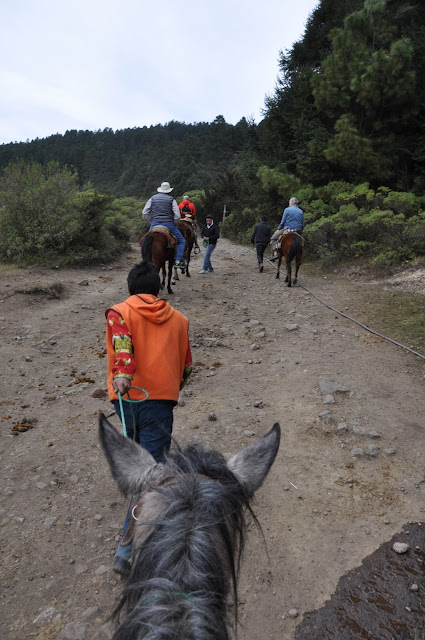 Sierra Chincua was breath taking...  The views of the surrounding mountains were gorgeous and millions of butterflies roosting on the trees was indescribable. 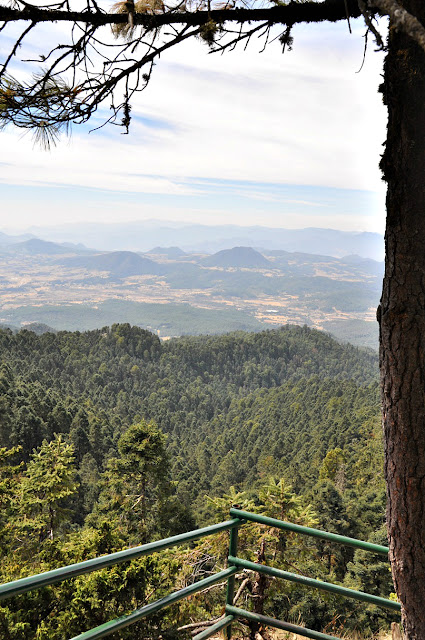 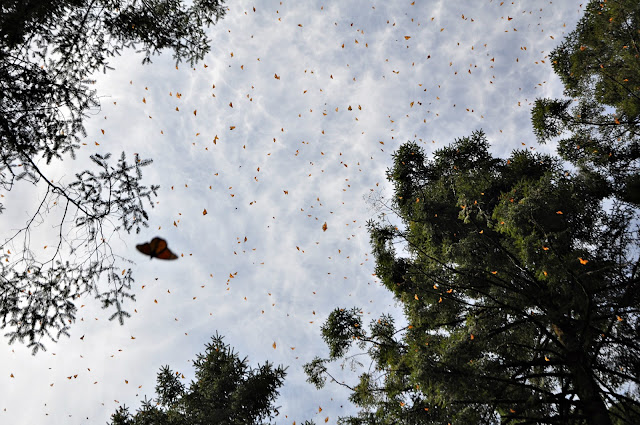 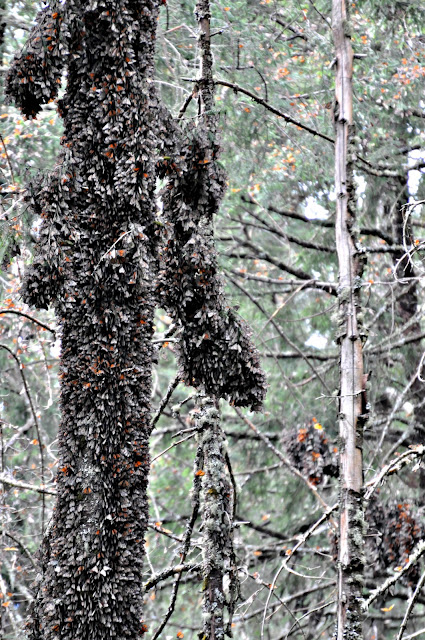 That night we stayed in the nearby town of Angangueo. Our driver told us this city had been destroyed by floods a few years back. The town still seems to be struggling to recover, but the inn that we stayed in - Hotel Don Bruno - was beautifully restored. It has a quaint restaurant that serves delicious food (the best guacamole). It was Superbowl Sunday and the innkeeper turned the game on for us to watch! It's pretty hard to make reservations at the hotel unless you can speak Spanish. However, there was only one other couple staying there on a Sunday night. It's cold in this area of Mexico in February - down to 30-40°F at night. They will provide you with a space heater for your room if you ask and it's definitely needed! During the day it warms to 70-80°F - so dress in layers. 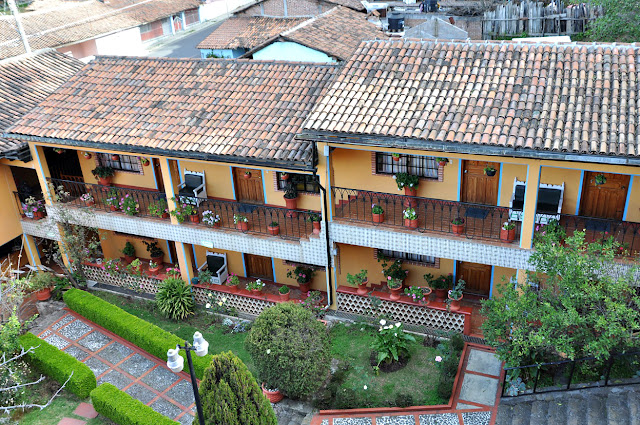 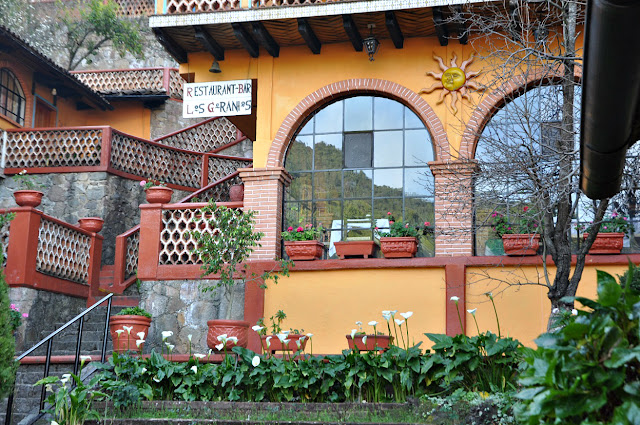 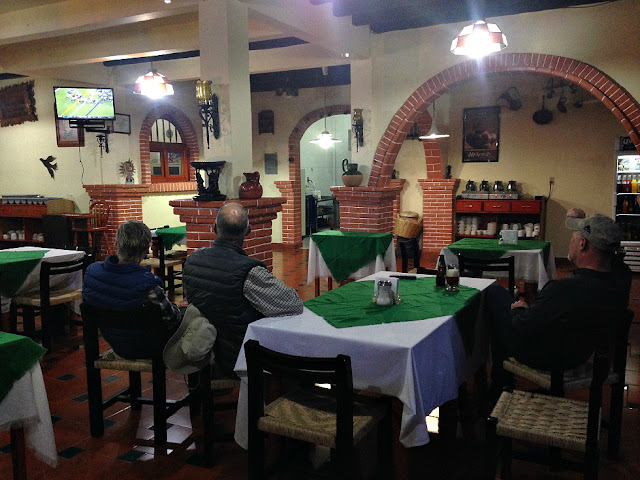 Monday we set out for our 2nd sanctuary - El Rosario. We arrived around 11am. The day was sunny and I'm not sure if it was the location, the weather or the time of the day - but this reserve was magical! Near the top of the mountain there was an explosion of monarchs! The air was alive with floating / flying butterflies, the ground was covered, the trees were loaded. It was so incredible! Much better than I could have imagined! 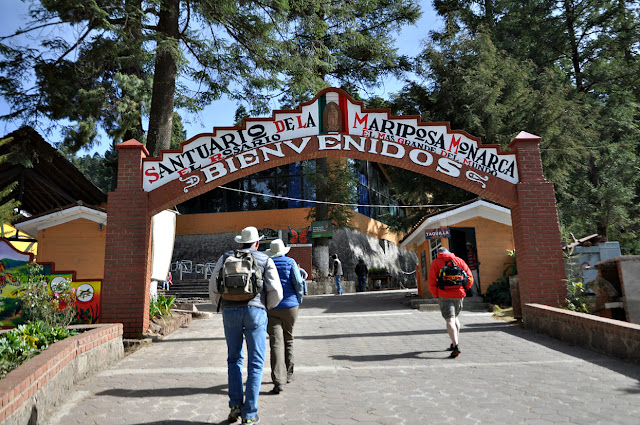 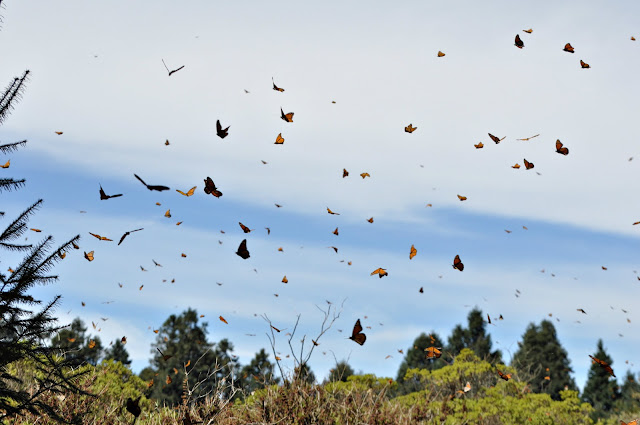 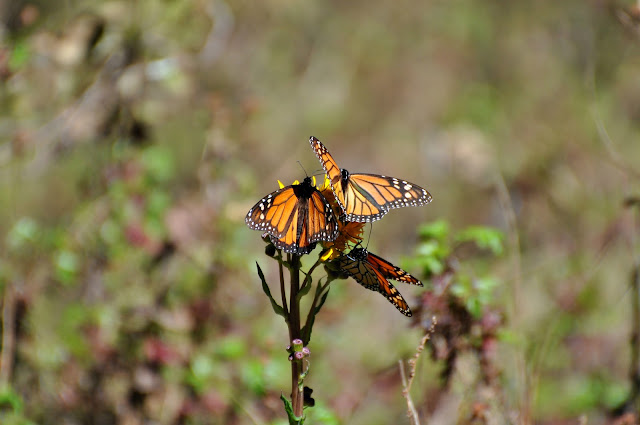 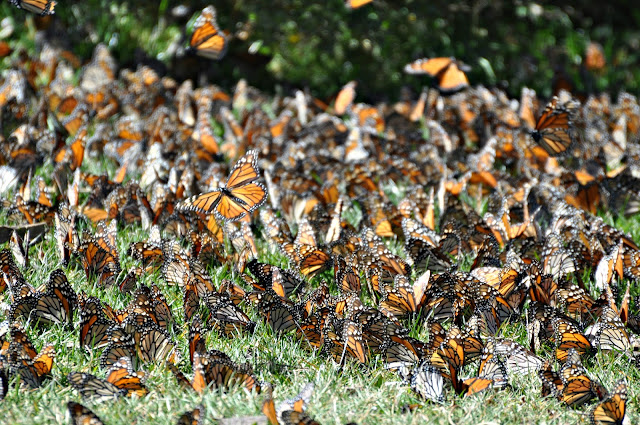 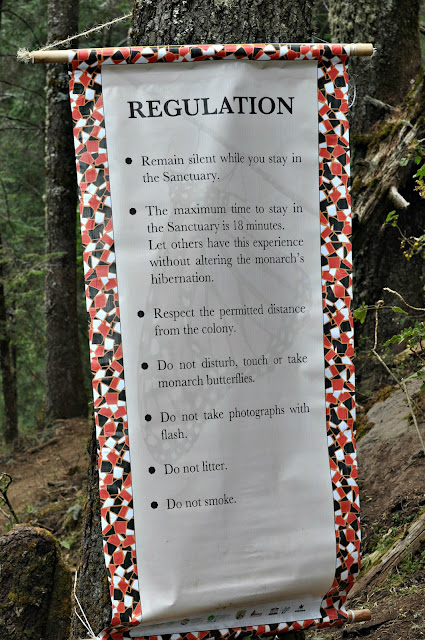 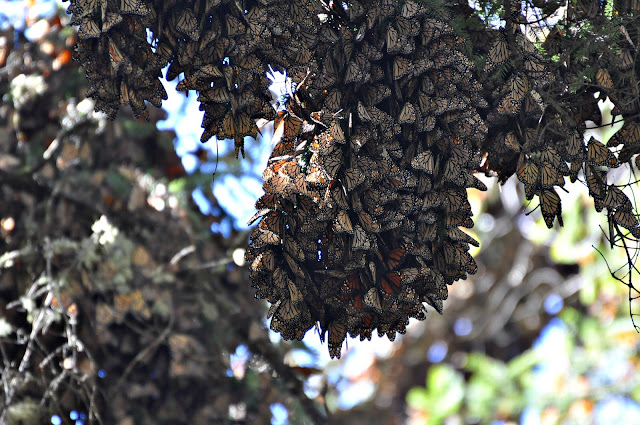 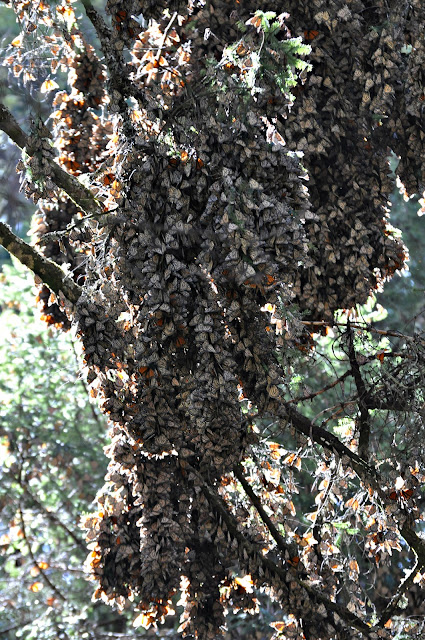 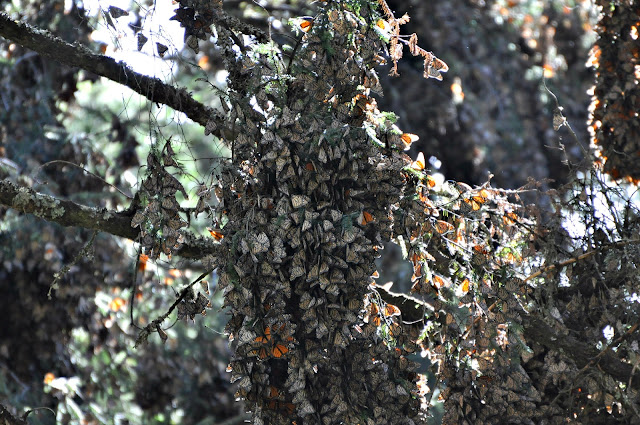 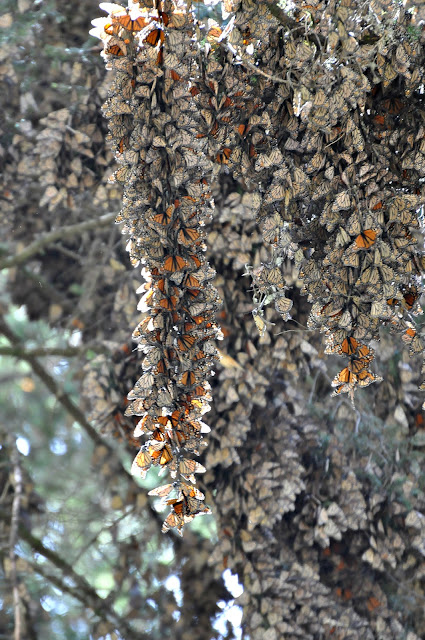 As for the safety of central Mexico. - I never felt threatened or witnessed any violence. I fell in love with the beauty of the landscape and cities, the people were kind, courteous, and hospitable. Even with the crazy fast driving, there wasn't the road rage and foul language I would expect in the states. This isn't the border or Mexico City - it's a part of Mexico that is rich in culture and history. If you have the chance, TAKE THIS TRIP!! 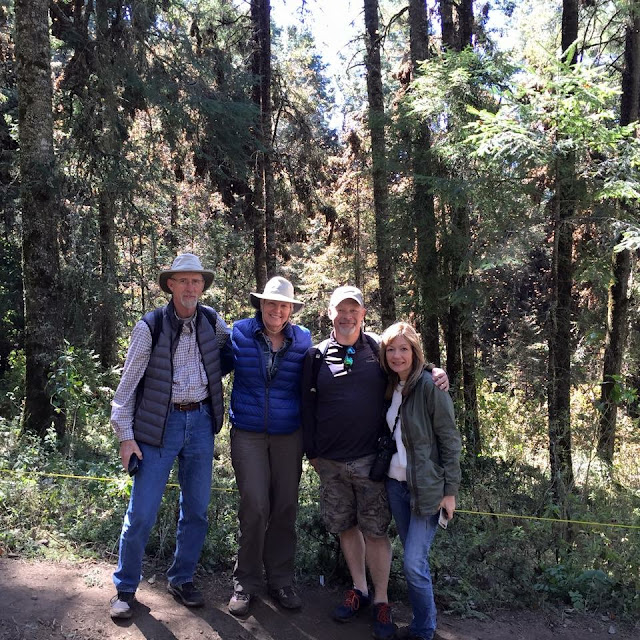 My garden has been certified for several years as a Monarch Waystation through Monarch Watch - an organization dedicated to creating, conserving and protecting milkweed / monarch habitats.
Refer to this link for more information on how you can help protect this unique butterfly: